On Sunday, June 6, the traditional Rose festival was held in the city of Kazanlak. This city is located in the valley of roses and is considered the largest exporter of roses. Their products, made from roses, are amazing. We learned that rose oil is exported all over the world and is used in multiple products such as chocolates, jams, liqueurs, and of course perfumes.

The Bulgarian Rose Festival in Kazanlak is held at the beginning of every June, specifically, with the main day of the festival being the first Sunday of June. The festival is therefore of short duration, 3 or 4 days and it concentrates many activities for the visitors. In our case we were able to enjoy the traditional parade that takes place. It is a parade in honor of the Queen of the Roses, chosen from a group of girls who have finished high school.

In this parade you can see a large number of participants, children from different schools, soccer players, karatekas, dancers and many others. Among all the participants we highlight some groups that caught our attention. The first one is the salsa dancers, they were dancing famous songs in Spanish and we were very excited to hear them there. The second group that stood out were the people who were playing bagpipes, it was a very nice and loud sound, and in our case the bagpipes are strange instruments that we are not used to seeing.

Other groups that caught our attention were the puppets, it was very interesting to see so many puppets and mocking characters there, we found them very funny. In general all the groups that participated in the parade we liked a lot, but these especially more. Although the ones we liked and surprised us the most were the Kukeri. The Kukeri dancers from Bulgaria are very famous, they wear spectacular costumes to scare away evil and attract good. The costumes cover most of the body, they are very striking because of the colors they wear, they also wear a mask that covers their entire face and combined with the costume makes the look impressive. But not only this, what caught my attention was the belt of bells they wear, it is impressive because they can easily carry about 8 heavy metal bells, moreover we learned that the weight they support is very high, can be almost 100 kilos. Each step they took sounded like a loud roar and you were amazed by the sound they made and by their clothing. We also learned that these belts were passed down from generation to generation and some could easily be 120 years old, this adds much more value to the costume and the tradition. We had heard about the Kukeri but we did not expect it in this parade, when we saw them we were amazed to be able to see them live. It was a unique and very special opportunity. When they were walking away, we were gawking at them enjoying the magnificent parade. Another thing that caught our attention, and we like it too, is that as it was very hot, some men were passing by refreshing us with water, and this water was rose water, you could cool off from the heat and you could also smell the wonderful smell of this special water.
We have to mention another of the best things that the parade left us.

When the groups were finished, all the people went to the middle of the street and started dancing traditional dances in big circles, there were at least 200 or 300 people dancing at the same time, and it was wonderful, we felt included in the festivity and we could learn certain steps and dances. In total they did 4 dances, it went like in levels, the first one was the easiest and the second one was not so difficult but the third and the fourth one were impossible for us, very difficult. Miguel stayed in the first level and Irene was able to do two dances. It was a unique moment in our lives, to be able to share with so many people cultural aspects different from ours. A day not to forget, to frame (as we say in Andalusia). 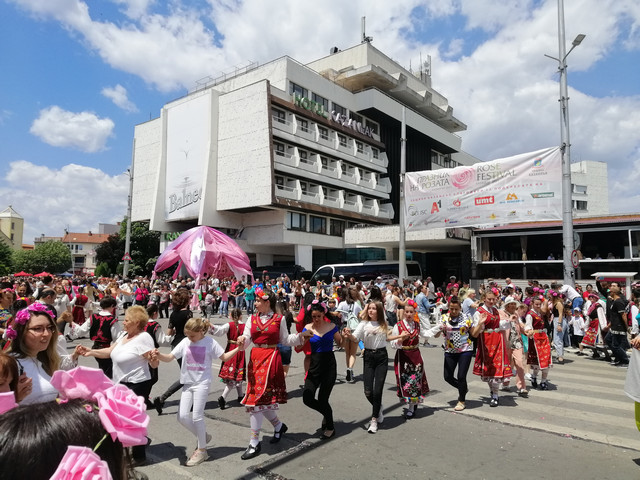 To finish the day we went to visit the city. We were in two different parks but each of them very beautiful. The roses were common throughout the city, wherever you went there were lots of roses that made the walk very nice and beautiful. If there were roses in the streets, in the parks there were many more, of all colors, but obviously the most striking were the red ones.
Finally we want to thank Stan for taking us to visit and enjoy this wonderful place, to Polina’s parents for opening the doors of their house and enjoy with them the wonderful food, and the gift (homemade rakia) that they gave us, and of course to Polina for accompanying us and teaching us all about Kazanlak and the different Bulgarian traditions.