The 2nd and 3rd of March are very important days in Bulgaria because they celebrate the liberation’s day and the recognition of heroes, such as Vasil Levski who was a bulgarian revolutionary and national hero. For these celebrations, on 3rd of March we went to Shipka to go up to the monument because on this day, everyone goes there to see the Shipka monument, which commemorates the pivotal battle.

On the other hand, on 5th of March, we also share this day with the kids of the kindergarten. We had the opportunity to visit the house/museum of Angel Kanchev, together with the children. We learned about his life story, his struggle and the liberation of Bulgaria, and also about other bulgarian revolutionaries. For our part, we provide a little bit of history about our heroes or important characters for Spain, about which we will explain more later. After introducing our heroes and learning about the history of Kanchev and the liberation, we made together with the children small flags of liberation. Then we were given a carnation to put on the statue as a way to honor his memory.

Here below, we want to explain a little bit of our important characters chosen, such as Mariana Pineda, Alvar Nunez and Maria Pita.

Born in Granada in 1804, he belonged to a noble family, although his parents were not legally married, probably because his father was a nobleman and his mother of humble origin. Her father, Mariano Pineda Ramírez, was a captain in the navy. At the age of 15 months she was orphaned and was cared for by her uncle. During her childhood she witnessed her town being invaded by the French, who would not leave until the end of the War of Independence (1808-1814). She also witnessed the promulgation of the Constitution of 1812, known as La Pepa.

In 1824, Mariana Pineda began her liberal political activism against Ferdinand VII. She tried to fight against the political and social progress that was spreading in Europe and throughout Spain. After the War of Independence, she annulled the Constitution of 1812, and for years she would maintain an absolutist system imposed with weapons and fear, fighting against those who sought the restoration of the Constitution of La Pepa. This constitution was defined by a multitude of rights and liberties, of all kinds, which until then had not been recognised. The monarch used brutal and bloody repression in order to prevent the acceptance of this constitution.

At first, he attended secret meetings of liberals. He helped those persecuted by the regime to escape justice by obtaining false passports, he also sent letters to people who had to flee Spain and he assisted liberal political prisoners in Granada. One of the most important actions in which Pineda participated was in preparing the escape of a liberal political prisoner condemned to death: Fernando Álvarez de Sotomayor, who managed to escape from prison and fled to Gibraltar in 1827. This action made the police suspicious and kept María Pineda under surveillance. So much so that in 1831 they searched her house and found a flag with the slogan “Liberty, Equality and Law”. For which she was arrested and tried. The story goes that it was the governor himself who brought the flag into María Pineda’s house, so that she could be arrested and tried. The judicial process lasted two months, and was questioned for malpractice, but on 26 April 1831 she was sentenced to death by garrotte vil. The Minister of Justice authorised a pardon for Pineda if she would inform on her companions, but she replied that “never will an indiscreet word escape my lips”. So on 26 May 1831, Mariana Pineda was assassinated.

The story and life of Maria Pineda was so cozy that in 1927 Federico Garcia Lorca premiered a performance about her life, being one of the representative works of this illustrious and famous Spanish poet and playwright. As well as it was represented in several canvases of famous painters.

He was born into a noble family, his father and grandfather were renowned military men. He set out as a sheriff on a mission to conquer Florida and find the fountain of eternal youth. Before arriving in Florida, they lost many men to bad weather and Indian attacks, and some men abandoned the expedition because it was extremely dangerous. The Indians told the Spaniards that the gold they were looking for was north of Florida, in the Appalachian province. The Carancagua Indians turned them into slaves. After many years with the Indians, Alvar learned to heal people from the teachings of the tribe that adopted him. He healed the son of a tribal chief, and was granted his freedom. He and other former Spanish slaves went throughout South America healing people as they searched for a Spanish settlement in the American territory. They finally found such a territory, and he returned to Spain. There he was granted the title of Governor of the Rio de la Plata. When he returned to America again, he disagreed with the treatment of the Indians by the Spaniards, and tried to defend the situation and restore order, but was condemned. He died in Seville, and insisted on re-establishing his honour, since the charges against him, accused of abuse of power in the repression of the insurgents, did not honour the acts he carried out. In addition to this, he discovered and discovered the Iguazu Falls and wrote the first ethnographic book on the indigenous populations of the Gulf of Mexico, called Naufragios (Shipwrecks).

On 3 May 1589, English troops arrived in La Coruña. The attack was part of the strategy maintained by the Queen of England, Isabella I, to take the throne of Portugal from her brother-in-law and later rejected pretender, King Philip II. The English surrounded the city of La Coruña, opened a breach in the wall that defended it and began the assault on the city. During this assault, they killed María Pita’s husband. It is said that she, filled with rage, snatched a lance with the English flag and with it killed the captain who was leading the assault on La Coruña. This made the English troops, made up of 12,000 soldiers, retreat and consider the attempt to take La Coruña lost. The story goes that this event was carried out to the cry (in Galician) of “Quen teña honra, que me siga” (which in English means: “whoever has honour, follow me”).

Once the battle was over, María Pita, along with other women who had fought in the battle, helped to collect the corpses and take care of the wounded. Although María Pita has gone down in history, there were many women who participated in the defense of the city. The enormous support of the women of A Coruña is remembered with great pride, because they were in the front line of defense fighting against the invasion and in the rearguard treating the wounded. 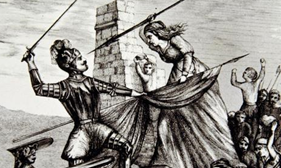 We liked this activity very much, it was a very complete activity because we learned more about the history of Bulgaria and Tryavna, besides seeing the house/museum and we visited other places. Finally, It was also the first activity that we spoke in front of the children in Bulgarian. It was a real challenge!!