Every country in the world is known for its peculiar habit. Italians are said to be able to talk only about food… and unfortunately this is true!! But what about Bulgarians? Well, most of our conversations with Bulgarians were about drinking! Especially they’ve told us about one of their traditional alcoholic grappa, ракия (rakija). They are used to make it on their own in a place called казана за ракия (kazana za rakija), and two weekends ago they invited us to see how they make it!

It was  really exiting! We went to a small village near Tryavna, in a little kazana in the middle of the forest… for a while we thought we were in Hansel and Gretel’s fairy tail!! There wasn’t any witch to wait for us, but we found the huge cauldron and the big oven!

We also had a really good picnic with a lot of traditional food, such as sirenè, kashkaval (two types of cheese), lyutenitza and a tasteful and homemade banitza (one of the most popular and traditional dish of Bulgaria!). Like in the fable, we ate as if we have had to get fat!!!

We also drank some fresh rakija… Wow it was so strong that we could feel really our throat burning!!!

It was a great occasion to spend some time with our new friends, chatting and listening to good music, nothing traditional in this case, just rock music!

In conclusion it was a wonderful day, even if our clothes disagree… too much smoke!!!! 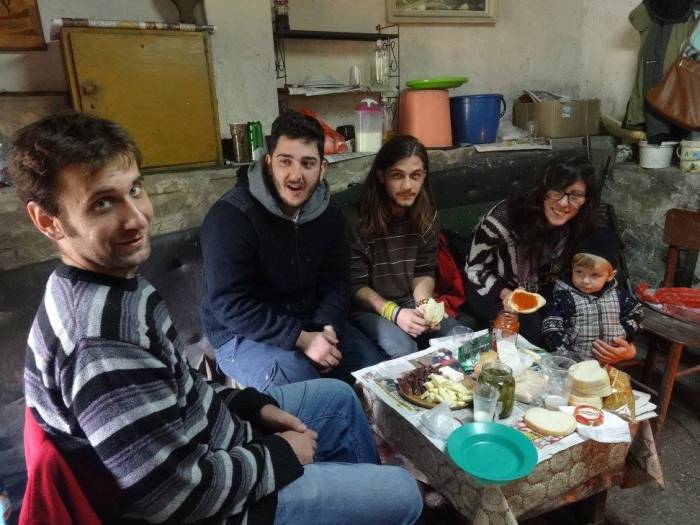