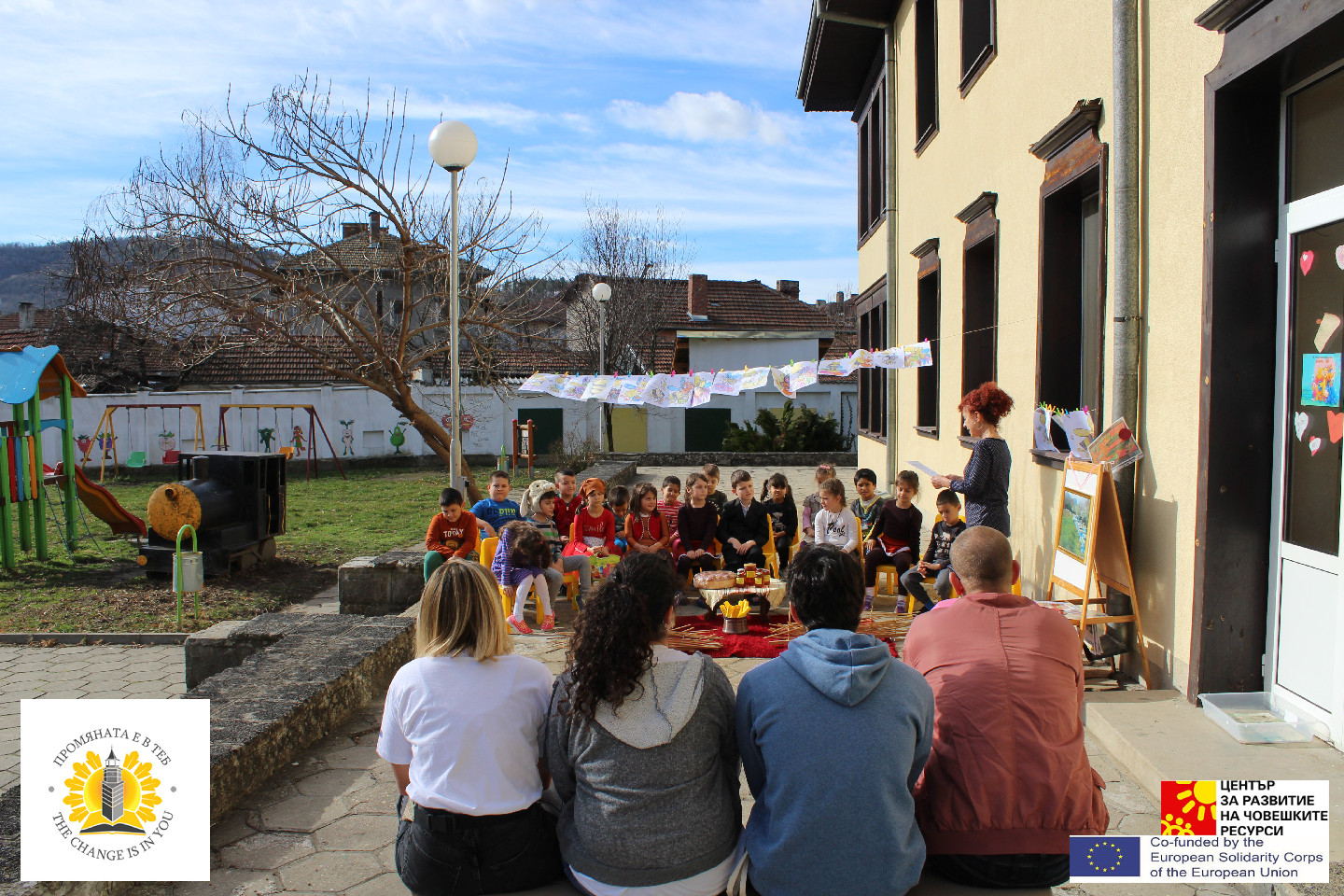 Bulgaria has deep-rooted honey traditions. Honey is considered an indispensable health food and its numerous healing properties are known all over the world. In this country, honey cultivation is carried out with the care of beehives. However, over the years the number of existing hives has decreased because the number of bees is decreasing. Undoubtedly, the importance of the role of bees for our survival is enormous, which is why the Bulgarians, with a centuries-old tradition of honey, pay homage to beekeepers, honey and bees on February 10th. Besides being an important event, in Bulgaria the weight of the Orthodox Church influences the celebration of this day, performing numerous religious rituals inside the churches.

On this day the volunteers went to the kindergarten in Tryavna, taking with us numerous cardboard wings, painted and cut out by us, for the children to wear, as they could put their arms through the elastic cords we had put on the wings. Besides that, we also had a photocall of a beekeeper and some bees, quite elaborate, with the idea of making the children enjoy this important day in Bulgaria, taking pictures and wearing bee wings.

When we arrived we saw that they, the children and the teachers had prepared a bench for us in the courtyard, near the exit of the classroom where they do their teaching activities, and in front of us they had arranged some objects with the purpose of carrying out a rehearsed theatre, to explain to us the healing properties of honey. In addition there was a tray with honey in a jar and bread, as this is how they eat it on this day, honey together with tender baked bread from Bulgaria. A picture was on a wooden easel, a picture of an old man who had been a very important beekeeper for many years. They explained to us that this man was very happy, because he drank honey every day. Honey, as they said, had healing and health-giving properties, and made you happy, feel good about yourself, and live a long and full life.

When we sat down on the bench they had kindly arranged for us, they introduced themselves as a group, and greeted us in Spanish. Their little faces were curious and happy as they looked at us, wanting to know no doubt what we had in store for them that day.

We introduced ourselves, told them our names and our country of origin, and said our first words in Bulgarian to greet them. Our first contact with the kindergarten children had begun, and they prepared to perform a little play in which, dressed as animals, they went to the office of a bear doctor, who told them that they could be cured if they used honey. After this little play they sang a song, in which they sang the song about bees. 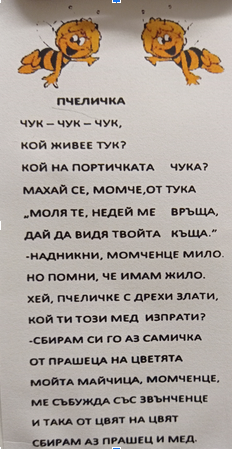 he song. As you can see in the picture the song starts imitating the sound of bees. It was fun to see them singing, they were happy while they were teaching us their song. After the song and the play they told us the story of a black-haired woman with long nails who caused diseases. But the bees attacked this woman. This popular story is very similar to the fact that the consumption of honey prevents diseases and strengthens the immune system.

It was time for us to explain to the children and teachers about the importance of honey in Spain. In Spain, as we explained, honey is also valued, and is used in numerous culinary recipes, such as bread with honey and oil, or bread with honey and cheese. We also use honey for sore throats, by putting honey in a small glass with lemon and very hot water. The children in Andalusia, southern Spain, often go to the honey museum with their class groups, to learn about the benefits of honey and the importance of bees for the existence of life on the planet. The children listened patiently to the explanations we gave in Spanish, which were then translated by a classmate into Bulgarian. Then came the moment the children and adults had been waiting for, the moment of handing out the bee wings. One by one we put the little bee wings on each child, while we watched them laughing and enjoying their little wings. We took a group photo, in which we were also wearing wings. All this was to remind us of the importance of bees!

After enjoying the little bee wings it was the turn of the Photocall. Each of the children posed in the hole of the beekeeper’s picture and had their photo taken. We said goodbye happy to have provided an educational and fun moment to this lovely group of children.

It was time to repeat the activity with the children of SOS Children. The director, the social workers and the children were waiting patiently on the football pitch of the urbanization. We took the wings and the photocall with us. We introduced ourselves and shared with them our customs regarding honey. They listened together with us to the story of the long-haired, long-haired woman who was causing misfortunes, and was scared away by the bees. Afterwards, one of the SOS Children workers spoke to welcome us, and we put the wings on the children, and they had their photos taken at the photocall. During the activity with the children of SOS Children we tasted honey with bread. We were each given slices of soft, fluffy bread to dip into the honey. Without a doubt, the Bulgarian gastronomy has nothing to envy to other gastronomies in the world.

After this day, the first activity we had planned was finished, we had done our job successfully and the children had enjoyed the activities. Moreover, not only the children had learned, but we had also learned about the importance of honey and the uses of honey in Bulgaria. Our first contact with the children was a success, and we realised that it was essential to improve our language skills. Fortunately for us, we started Bulgarian language classes shortly after.

The house where we are living is next to other houses where the children of SOS Children and the social workers, a woman and a man, live. They call themselves a family. And that was the feeling they gave us, a big family willing to open their mind to another culture, just as our mind is open to the Bulgarian culture. Their hospitality and good humour filled us with good expectations, we couldn’t have chosen a better place to live, we felt at home, and that, being in a country far away from your family, is very important, not to say essential. Thank you Bulgaria for this beautiful welcome and this great hospitality! If you had told us months ago that we would have found peace and happiness months ago, I don’t think we would have believed it possible. This place is not only beautiful for its landscapes full of forests and snowy mountains, it is also beautiful for the kindness of the people.